709 large business jets delivered at an estimated cost of over $35.4 billion

New research(1) from Global Jet Capital, a provider of financing solutions for large-cabin, long-range private jets, reveals that 709 mid to heavy private jets were delivered to Europe between 2011 and 2015, with a combined value estimated at over $35.4 billion.

Global Jet Capital says these aircraft typically cost between $25 million and $75 million each, and up to 80% of the funding used to purchase these is sourced through external financing.

While overall deliveries of business jets to Europe are down 35%, when comparing the five-year time periods 2006-2010 with 2011-2015, deliveries of mid to heavy jets have increased by 18%. Similarly, the corresponding figure for global deliveries of larger jets has also decreased by 19%.

The aviation finance specialist, which recently completed the purchase of the aircraft lease and loan portfolio of GE Capital Corporate Aircraft in the Americas representing approximately $2.5 billion of net assets, has around $1 billion to lend to clients to purchase relevant business aircraft in Europe and elsewhere around the world.

Dave Labrozzi, Chief Operating Officer of Global Jet Capital said: “Long term, we expect attractive growth in the European business aviation market. Despite deliveries to the region being down as a whole, it has experienced a steady increase in the number of larger aircraft being delivered.

“Given that we are one of the only dedicated aviation finance specialist to operate on a global basis, and we have significant funds available to lend to clients here wanting to purchase mid to large private jets, it is an exciting market for us.” 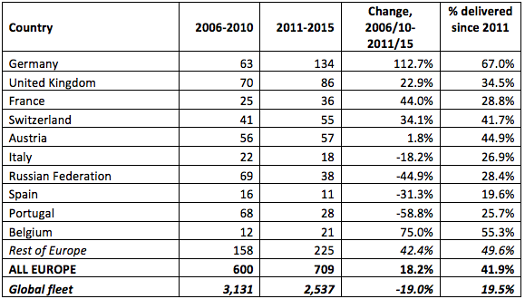 The company’s current management team and executive committee is composed of leaders from business jet manufacturers, maintenance and service providers and leading financial institutions who have served the private aircraft industry for a combined 200-plus years and have completed over 3,500 aircraft transactions.

If a private aircraft is right for you, call us at 844.436.8200 or contact one of our management team members here.