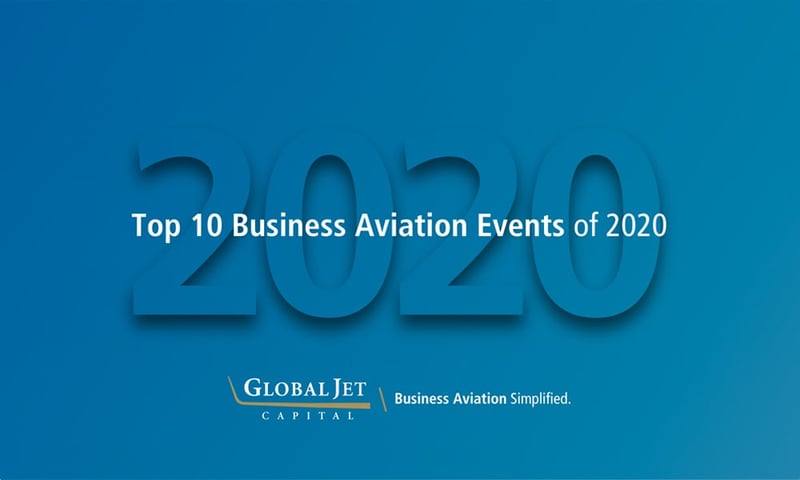 From COVID-19 rebounds, to increased usage of sustainable fuel and new business aviation products on the market, we look back at the Top 10 Business Aviation Events that shaped 2020.

Following the outbreak of COVID-19 and ensuing lockdowns in March 2020, business jet flight operations declined. During the low point in April, the U.S. Federal Aviation Administration reported that flights declined 75 percent compared to a year earlier as many people stopped travelling. However, those that required travel began to seek out business aviation. According to one study, flying on business aircraft can reduce as much as 680 contact points with other people compared to a commercial flight. That became a major selling point to health and safety-conscious passengers. Business aircraft also fly to more destinations than the diminished commercial fleets, furthering their appeal. As a result, business jet flights have rebounded from lows in April and are now hovering at about 14-15 percent below 2019 levels.

The business aviation community has made strides in increasing sustainable aviation fuel (SAF) usage in 2020. During a virtual conference held in October, Joel Szabat, U.S. Department of Transportation’s assistant secretary for aviation and international affairs indicated that operators used twice the amount of SAF in the first half of 2020 than in all of 2019, despite there being fewer flights due to COVID-19. To support increased SAF usage, fixed-base operators, such as Signature Flight Support, invested in infrastructure to improve fuel delivery in 2020. Industry participants expect to continue expanding SAF usage in 2021. For example, Rolls-Royce will test 100 percent sustainable fuel mixes on its Pearl engine in 2021.

At VBACE 2020, Textron Aviation introduced the Beechcraft King Air 260 turboprop, a smaller version of its recently launched King Air 360. The Beechcraft King Air 260 turboprop now provides a reduced pilot workload with digital pressurization and the advanced Innovative Solutions & Support ThrustSense Autothrottle system and a new cabin seat design. The twin turboprop offers a range of 1,720 nautical miles and carries up to nine occupants. The latest model in the Beechcraft series is already in production, and the certification and first deliveries of the $6.7 million airplane will take place early 2021.

The King Air 360 itself was only introduced earlier in 2020, and deliveries began in the autumn. The King Air 360 also features improved cockpit features and upgraded cabins. The first new Beechcraft King Air 360 has been delivered in November 2020 to its first customer. Additional features and benefits include an enhanced digital pressurization system, Onboard Maintenance System updates, a full regime Autothrottle system, and six new interior schemes. Cabin improvements bring increased comfort and elegance to the King Air 360 turboprop.

Global Jet Capital closed its fourth ABS offering, bringing total assets securitized to over $2.8 billion and bonds issued to over $2.3 billion. BJETS 2020-1 securitization was oversubscribed in all three tranches totaling $522 million and attracted orders from over 30 investors. The success builds off the strong performance of the company’s previous ABS transactions, which have demonstrated remarkable resilience throughout the COVID-19 pandemic – in stark contrast to a wide variety of other ABS asset classes, including commercial aviation.

Business aviation has seen an increase in new entrants to private aircraft ownership, charter, and other memberships. High Net Worth Individuals are drawn to business aviation as a result of COVID-19 and the desire to avoid crowded commercial airports. With the onset of COVID-19, the business aviation industry was quick to respond with new safetyprotocols to protect passengers and pilots. Some new buyers have opted to lease aircraft as a low-risk way to step into full aircraft access without ownership risk. Industry optimism remains high on the increase of new users to the market.

Dassault introduced on Dec. 8, 2020 at the Lindbergh hangar in Merignac France the newest addition of exceptional business jets to the Falcon Family – the ultra-widebody Falcon 6X. Launched in February 2018, the 5,500nm (10,186km)-range Falcon 6X is due to enter service in 2022 and will have a list price of $47 million. It is powered by the Pratt & Whitney engine PW812D. Thirty extra-large windows and a skylight provide natural light into the cabin. Even though the pandemic has presented some challenges for partners, they’ve been able to keep the program on track and hit all the milestones.

Those interested can take a virtual cabin tour and have a look at the video from the unveiling at Bordeaux-Merignac, France.

One Gulfstream Takes a Bow, One Soars

In June, Gulfstream announced the 18-year production run of the popular G550 is ending, with final commercial deliveries being completed in 2021. With over 600 in service, the G550 is one of Gulfstream’s most successful aircraft models, boasting a total of 55 speed records. As G550 production sunsets, Gulfstream now has five G700 flight-test aircraft in its fleet as of late 2020. The fifth test aircraft achieved its top maximum operating speed on the first flight, reaching Mach 0.935. Customer deliveries of the $75 million dollar jet begin in 2022.

The first customer delivery of Bombardier’s Learjet 75 Liberty has been completed, achieving an important milestone for the model line. The Wichita-built aircraft offers a competitive ownership experience because of its $9.9 million price tag, and performance characteristics within the Light Jet category. Bombardier’s Global 5500 has also entered service, after two years of development, boasting a large size, longer range and improved, quieter cabin compared to its predecessor, the Global 5000.

Embraer delivers the first of many Praetor 600’s to Flexjet, Partners with Porsche for a 911-themed Phenom 300E

Embraer announced a $1.4 billion contract with Flexjet one year ago at NBAA-BACE and has now delivered the first of many Praetor 600’s from this deal. Embraer and Flexjet have had a long-term partnership going back 17 years and this new delivery cements the partnership into the future. Embraer also teamed up with German high performance automobile manufacturer, Porsche, for a limited run collaboration between Embraer’s Phenom 300E and Porsche’s 911 Turbo S. Ten pairs will be sold with matching paint schemes, interiors and several unique designs between the two platforms.

We will be exploring several topics for the first time throughout the year, so please check back often, or better yet, subscribe to receive email updates from us.