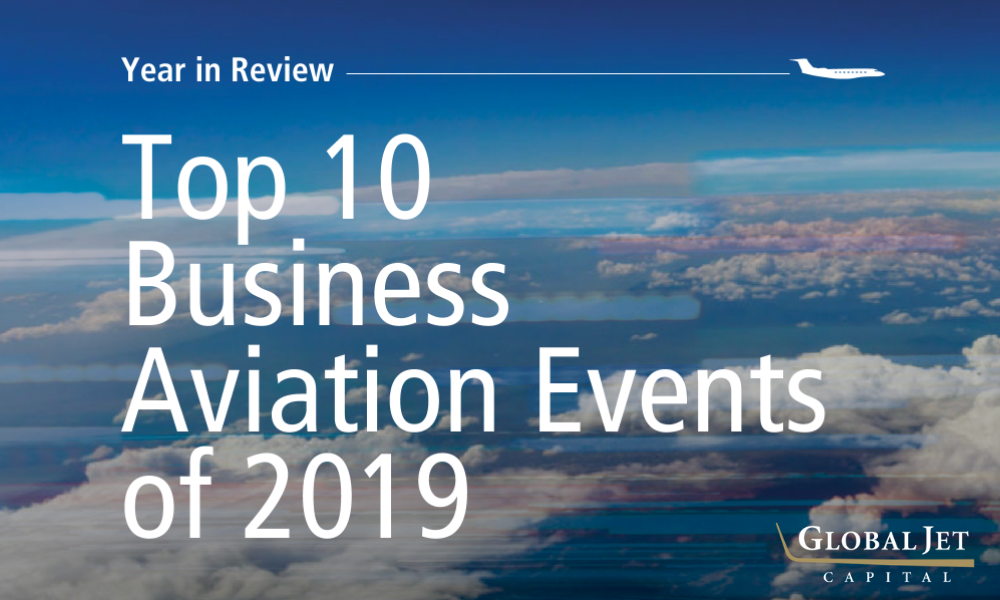 As we ring in the New Year, we once again want to look back at last year’s highlights. We were feeling nostalgic last year too when we wrote about new aircraft model releases (and cancellations), World Cup side effects, and new business aviation offerings in the market. In 2019, new aircraft were certified and new models were introduced; mergers, acquisitions, and sales have reshaped the business jet industry; service is becoming more important; and new technologies are driving change.

Gulfstream introduced a new flagship jet at the 2019 National Business Aviation Association’s Business Aviation Conference & Exhibition (NBAA-BACE 2019) positioned in the same class as Bombardier’s Global 7500. The new jet, designated the G700, will be listed at $75 million when it enters service in 2022 and will be 10 feet longer than the company’s current flagship, the G650. The cabin can be divided into up to five living areas, including a master bedroom suite with shower. Powered by all new Rolls-Royce Pearl 700 engines, the G700 will feature the Symmetry flight deck from the G500/G600.

Recent reports indicate general aviation accounts for 2% of global CO2 emissions. Of this 2%, business aviation is responsible for an estimated 1.5% of CO2 emissions. The International Civil Aviation Organization (ICAO) has a plan to reduce the carbon footprint called the Carbon Offsetting and Reduction Scheme for International Aviation (CORSIA), which begins with carbon-offset requirements. Other initiatives include sustainable aviation fuel, electric aircraft, airframe technology, and improved flight planning.

Aviation authorities from around the world certified jets from Bombardier, Cessna, Embraer, and Gulfstream in 2019. Embraer’s Praetor 600 was certified by Brazil’s Civil Aviation Authority (ANAC) on April 18 while its stablemate Praetor 500 was certified on August 13. Cessna’s citation Longitude was certified by the U.S. Federal Aviation Administration (FAA) on September 23. Only one day later, Transport Canada awarded a certification to Bombardier for its Global 5500 and Global 6500. The new aircraft certifications, along with those in late 2018 – such as the Pilatus PC-24 and Bombardier Global 7500 – are driving interest in new aircraft among the business jet community.

For much of 2019, Bombardier’s main initiative was to increase its focus on business aviation by selling off business lines not essential to its core offering. In June, Bombardier announced it had sold off its Q-series program assets to Longview Aircraft Company (which changed its name to d Havilland Aircraft) and its Canadair Regional Jet program to Mitsubishi Heavy Industries. In October, Bombardier sold off its aerostructures business to Spirit AeroSystems. The sale of the divisions completes a process started in 2017 with the sale of the C Series to Airbus and enables Bombardier to focus more completely on business jets.

The approaching ADS-B mandate in the U.S. has been a major storyline in 2019. Europe and Canada will also mandate installation of ADS-B equipment on aircraft; however, the deadlines are later in 2020, while the U.S. mandate takes effect on January 1. Many service centers say they began to see an uptick in ADS-B installation requests in mid-2017 and requests have continued to increase since then. Most newer and larger aircraft have been upgraded, but work remains to bring the entire fleet into compliance. By October 2019, about 85 percent of the U.S.-based business jet fleet had been upgraded to be ADS-B compliant.

Service Centers from Gulfstream and Dassault

As the business aircraft market matures, so do its aircraft and with fewer retiring than entering service, there are more aircraft than ever that require maintenance regularly.  In the interest of furthering their offerings in 2019, OEM’s have opened new service and support centers. Gulfstream now has 11 owned service centers worldwide and right behind them is Bombardier with more mobile response teams, distribution centers, and line maintenance operations than ever. Dassault also made a commitment in 2019 to increase its Falcon response team’s performance and global efficiency and has continued to partner with various MRO’s globally to support its fleet of aircraft. 2020 is sure to bring even more touch points for OEM’s with the aircraft they support.

A new giant has emerged in aviation: “Raytheon Technologies Corporation". The new company formed after The Raytheon Co. and United Technologies Corp. merger. Second only to Boeing, this aviation company is expected to top annual sales of $74 billion. The merger has unanimous support from both Boards, and is expected to be finalized in 2020. Both companies have a legacy of accomplishments—from GPS signaling to the Patriot missile. As a large supplier of components to both the military and commercial aircraft industries, the combined company is expected to play a major role in the business jet market.

In the first quarter of 2019, Global Jet Capital opened regional office locations in Hong Kong and Zurich, Switzerland. Staffed with legal, underwriting, marketing, and sales team, Global Jet Capital is poised to meet the expected growth of nearly 11% in new deliveries to the Asia Pacific region and the growing European market, the second largest business aviation market in the world.

At this year’s NBAA-BACE in Las Vegas, Flexjet, the private jet charter and travel company, placed an order for $1.4 billion-worth of Embraer business jets in the midsize and super midsize segments. The Phenom 300E’s and Praetor 500/600’s will help Flexjet maintain its reputation of having some of the latest and greatest aircraft to offer their customers. This transaction represents the 4th time that Flexjet has been the marquee customer for a new Embraer model. Previous models were the Legacy in 2003, the Phenom 300 in 2010, and the Legacy 450 in 2016.

Founded in 2013 by aviation entrepreneur Kenny Dichter, Wheels Up has grown rapidly. After just 5 years in business they had sold nearly 6,000 memberships, flown over 60,000 flight hours, and had nearly 100 planes. This year in June they announced they would acquire Travel Management Company (TMC) and their 24 aircraft as well.  Later in 2019, they announced the purchase of Aviantis a technology platform allowing them to further streamline access to the aircraft they manage. In December, Wheels Up merged with Delta Private Jets, creating one of the largest aircraft charter companies in the U.S. This explosive growth and ease of access has changed how the charter market behaves.

To connect with one of our business aviation experts to discuss private aircraft financing, contact us here.